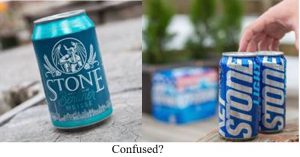 Craft brewer Stone Brewing Co. recently sued MillerCoors for trademark infringement. Stone Brewing, which has a brewpub in Richmond, claims its STONE trademark is being infringed because MillerCoors lately has been calling its KEYSTONE LIGHT beer just STONE.

MillerCoors recently redesigned the KEYSTONE LIGHT beer can to emphasize the word “STONE.” “STONE” now runs the length of the can in large font, with “KEY” above it and “LIGHT” below it. On one side of the can “STONE” is all you see.

MillerCoors has been running a social-media campaign on the theme “hunt the Stone” with pictures of its can (prominently showing the word STONE) mounted on a board like an animal game trophy. It ran a social-media blitz last Christmas with catchy phrases such as “let it ‘Stone” (a play on “let it snow”). It changed its packaging so cases of beer can be stacked such that the word STONE is repeated in a pattern, like a stone wall.

Stone Brewing’s case looks reasonably strong, but MillerCoors hasn’t filed its answer yet, so maybe it has a good counter. Stone Brewing has a long-standing federal registration for its STONE trademark for beer. Because MillerCoors is selling the same product, and sometimes calling it the same name, STONE, there seems to be the potential for consumer confusion.

Regardless of how the case resolves, there are lessons here for other businesses.

Be Careful When Renaming.

Before changing your trademark, check to make certain the changed name isn’t too similar to someone else’s trademark.

A trademark is the distinctive name you give to any good or service, or a slogan used to promote such sale, or the name of a business.

In an infringement fight between confusingly similar trademarks, the older trademark generally wins. When you change your trademark, you might be losing the seniority of your old trademark and starting the clock over with your new trademark. You might regret losing that seniority.

Don’t intentionally cozy up to someone else’s trademark. You’re asking for trouble, such a potentially paying triple damages and the other side’s attorneys’ fees.

Pick a distinctive trademark so you can avoid unnecessary confusion battles. Steer away from merely descriptive names and anything similar to trademarks already in use for similar goods or services.

MillerCoors’s predecessor registered its KEYSTONE trademark for beer in 1989. Stone Brewing filed its trademark-registration application for STONE in 1996 and began selling its beer two years later.

Some are similar to the STONE name, such as SKIPPING STONE, STONECLOUD, STONE FACE BREWING CO., STONE SOUP, and STANDING STONE.

Perhaps the closest are registrations for STONE WARRIOR, including a logo registration that contains those words and a drawing of an Asian warrior in a helmet. That character looks similar to the Stone Brewing label, which features a gargoyle.

Because of that crowded field of “stone” marks for beer, Stone Brewing must argue that consumers can distinguish between the many beers with “stone” in their names but are likely to be confused by the inexpensive, mass-produced MillerCoors beer despite significant differences in packaging appearance and price point.

Don’t Wait Too Long to Sue.

Did Stone Brewing wait too long?

If you wait too long to sue someone for infringement, you can lose your right to sue or have potential remedies curtailed.

Stone Brewing probably didn’t wait so long that its entire lawsuit will be dismissed, but I wonder if the delay in suing will undercut Stone Brewing’s claim of imminent, drastic harm.

If you find someone infringing on your mark, it’s unwise to wait and see how much it hurts you. That delay might cause a court to conclude that you’re not being significantly hurt and you’re just hunting for a payday. Also, the passage of time with no evidence of confusion by consumers might hurt your case.